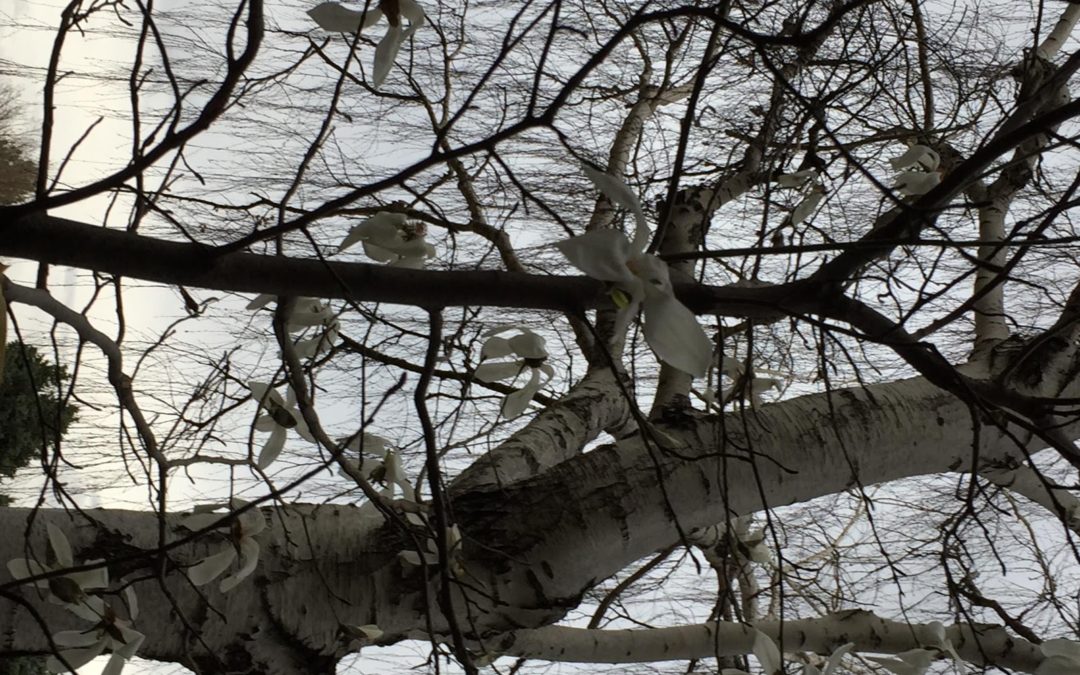 Nature gives us glorious creative visions with the coming of each season. Spring is an especially enchanting display of objects that catch our eye and capture our imaginations. We took this inspiring photo as we walked through Denver Botanic Gardens. When we approached the tree from a distance it looked like a tree full of roosting birds. As we moved nearer, we could see it was an azalea tree in full bloom – white flowing petals that looked like cats, helicopter blades, and jellyfish. What do you see?

What is perception, and what does it have to do with creativity? Perhaps a helpful way to think of perception is to look at some synonyms: insight, awareness, acuity, discernment, observation, and viewpoint. All may have a different emphasis, but they are similar in meaning.

Creativity involves changes in perception; in other words, a newfound way of looking at or viewing something. Perception allows us to look at something and see something different than that seen by others. This is a prerequisite skill to being able to produce at any level of creativity. In our classrooms we noticed students who were more flexible in changing their perceptions demonstrated higher levels of creativity . . . it’s a sign!

To be more efficient and effective thinkers, we all have mental filters that help us disregard or ignore minor stimuli in our environment. If this did not happen, we would have to pay attention to every minor detail, we would perhaps be prone to sensory overload, and we would never get anything done. However, this very system that facilitates successful thinking often interferes with creative thinking.

Adams (2001) in his classic book Conceptual Blockbusting: A Guide to Better Ideas, refers to these natural filters as perceptual blocks. They can be cognitive, emotional, or environmental in nature and include:

Past Predictions of the Future

Take a moment to consider another category of perceptual roadblocks to creativity in these Past Predictions of the Future. It is amazing to look back at the predictions made by some experts in their fields and see how unrealistic and even laughable they are today. Epicetus stated it somewhat differently, “What concerns me is not the way things are, but rather the way people think things are.”

What if everyone believed the following and acted accordingly:

Edward de Bono states, “Most of the mistakes in thinking are inadequacies of perception rather than mistakes of logic.” This makes sense, as the emphasis is traditionally placed in the secure truth of logic rather than the ambiguity and capriciousness of perception. In other words, we often continue to see the world as we initially perceive it, not the way it can be.

1. Here is the dilemma. Our practical and useful mental filters can get in the way and become perceptual blocks when we need to think creatively. If we want our students to learn to think more creatively, the major challenge is to teach them ways to temporarily suspend or ignore these perceptual blocks.

2. One simple activity is looking at photos like the one above, the clouds or stars in the sky, and creating your own interpretations. You can find our favorites in our book The Curiosita Handbook of Instructional Strategies and by Googling divergent thinking activities.

3. Flexibility exercises must be practiced daily to produce changes in the malleability (stretching) of the brain. This is an essential trait of the creative mind. It opens the doors to changes in perceptions.

4. The ability to form diverse perceptions is one of the essential steps in becoming a more creative thinker. Being aware of the role perception plays in our creative thinking, and knowing we have the ability to actively or intentionally change our perception, is part of the growth mindset of creativity. We can teach students through frequent practice to throw off their mental chains and open their minds to improved creative thinking.

. . . and finally we will leave you with a new perception of the beautiful blooming azalea flower.

“If the doors of perception were cleansed, everything would appear to man as it is, infinite.